Chantilly, Virginia is named after the Chantilly Plantation that once was there. During the Civil War, yankee troops burned and destroyed the house. Today, we are here to help the Arvelos family with a bee colony removal.

When we arrived at the Arvelos residence, it was an overcast day but we were still able to see the bees going in and out of the A/C line penetration. These little ladies will take advantage of any hole if it accesses an enclosure where they won’t be disturbed.

We used our thermal camera to locate the bees. We found them in between the basement and first floor. We would need to acces them from below. So we headed to the basement.

Mr. Arvelos informed us that the family had just finished remodeling downstairs where the bees were located. The Sheetrock had only been installed a few months prior, so we knew that the hive couldn’t be but so big.

After Destiny and I got suited up it was time to get to work. The first thing to do was to build a room using drop cloth. This will contain the bees and allow us to capture the stragglers easier.

Upon cutting into the ceiling, we ran into a small issue. The A/C lines and electric ran right above where we were cutting. Carefully, we cut the hole bigger and we’re able to locate the bees. They were right where we had thought they would be. 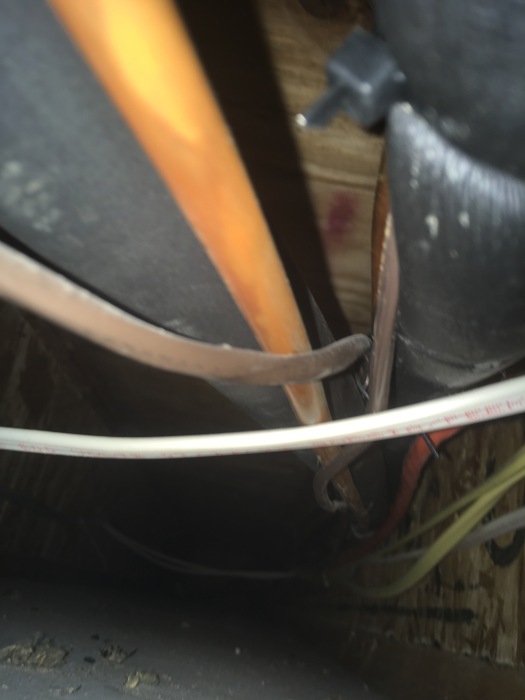 Even though they were a new hive, they had built a good amount of comb. We estimate that they had been there about a month.

We vacuumed and cut comb for the next thirty minutes. We were using a cardboard box as the hive with thin strips of wood screwed along the top to support the frames.

This hive was so new that we weren’t able to tie the comb into the frames because the comb was so fragile. Instead we laid the comb in the bottom and allowed the bees to take care of the eggs and larvae.

When we finished, we cleaned up our mess, caught the stragglers, and loaded our equipment.

It was such a pleasure to meet Mr. and Mrs. Arvelos. They both have such warm and friendly personalities. We are glad to have met the Arvelos family! Thank you for choosing Old Dominion!